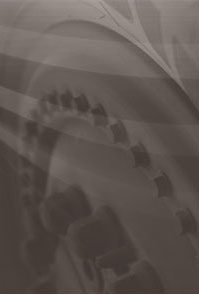 More than 500 BOXER contracted with the UK 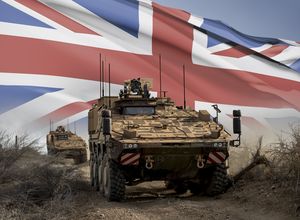 London, 04.11.2019 ­– On November 4, OCCAR on behalf of the United Kingdom of Great Britain and Northern Ireland (UK) and ARTEC signed a contract for the procurement of more than 500 BOXER vehicles. The contract encompasses four different Build Configurations of BOXER, based on a common platform in operation within three nations already. After provision of the proposal early 2019 it only took 8 months to finalise the contract in which the UK joins the existing contract between ARTEC and Germany, The Netherlands and Lithuania. First deliveries are expected for late 2022. Production of the vehicles will start in Germany and will then be transferred to the UK.
With this contract more than 1,200 BOXER vehicles have been contracted by Germany, The Netherlands, Lithuania and the UK. 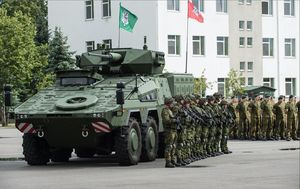 Rukla, 09.07.2019 – On 9 July 2019 the first two BOXER vehicles were handed over during a ceremony to the Algirdas Battalion of the Lithuanian Armed Forces in Rukla as Infantry Fighting Vehicles.

The procurement of the vehicles is “... one of the most ambitious projects of upgrading the Lithuanian Armed Forces in recent years to ensure the security of Lithuania for several decades to come,” Defence Minister R. Karoblis stated.

The contract amounts to 88 BOXER IFV vehicles and is planned to be delivered until 2021. The vehicles feature a 30 mm RCWS and is highly protected to secure and transport up to eight soldiers besides the driver, commander and gunner. 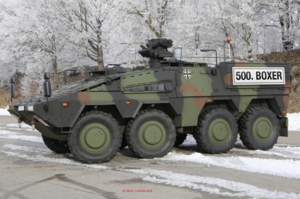 Munich, 08.03.2019 – In February 2019 the 500th BOXER vehicle was handed over to the customer in Munich as an Armoured Personnel Carrier variant, version A2.

The vehicle is part of the second batch order from Germany which amounts to 131 Armoured Personnel Carriers (APC) and is planned to be delivered until 2021. The APC variant features 8 dismounts, 4 crew hatches, 14 m³ of protected stowage volume as well as the incorporated improvements which are the result of BOXER’s deployment to Afghanistan. 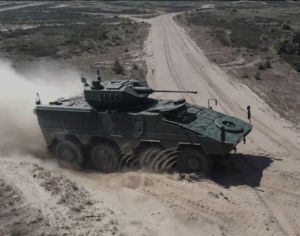 Munich, 08.08.2018 – In April 2018 Lithuania received the first of two BOXER IFV prototype vehicles to conduct intense tests at German military training areas.
The vehicles were produced according to the requirements of the Lithuanian Armed Forces and the intention of the tests is to determine whether the two prototypes constructed on Lithuania’s order match the list of requirements. Reliability, safety, malfunction free operation of components and modules are key priority and are monitored closely. The key task of the testing is to remove any technical deficiencies before mass manufacturing begins.
Specialists from the Lithuanian Armed Forces are participating in the testing as well to gain experience in maintaining and operating the IFVs. 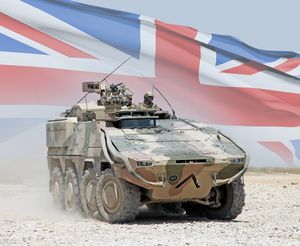 Munich, London 03. April 2018 – The British Ministry of Defence announced on March 31st that it will re-join the Boxer-programme. With this, the United Kingdom, which played a major role in the vehicle’s design, development and testing from 1999 to 2004, has taken the first step to become one of the major Boxer-User-Nation. The negotiations are conducted by the Organization for Joint Armaments Cooperation (OCCAR) and ARTEC.

The framework conditions for the collective procurement of this vehicle with other nations have not changed since the initial phase of the Boxer programme. With three countries already actively using it – Germany, the Netherlands and Lithuania – there are many advantages not only in procurement, but also in the application phase. Together with partners BAE Systems, Pearson Engineering and Thales UK, the ARTEC Consortium will thus be creating or securing over 1,000 jobs in the United Kingdom. 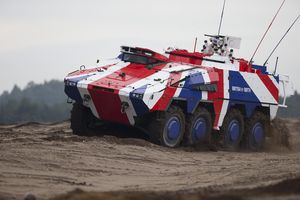 In early 2018 leading British companies in the defence sector BAE Systems, Pearson Engineering and Thales UK have signed agreements with the ARTEC consortium as partners for the production of BOXER. Should the armoured wheeled vehicle be selected as the British Army’s next generation Mechanised Infantry Vehicle (MIV), at least 60% of BOXER’s value creation and 100% of final assembly will take place in Britain. To ensure the best value to the British tax payer, ARTEC has defined a competitive process for the main partners and their supply chains to follow.

ARTEC’s investment in the UK value chain is estimated to secure or create at least 1,000 jobs all across the country. The UK partnership approach will ensure that British companies are fully embedded in the MIV supply chain. Rolls Royce, Parker-Hannifin, WFEL and British subsidiaries of the ARTEC parent companies will also supply British content.

Link to the Media page 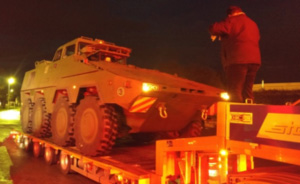 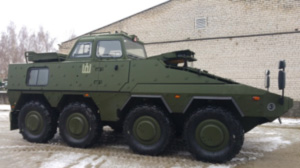 The handing over ceremony took place at the 18th December in Kaunas (LTU). Because the provided BOXER’s are intended for Driver training purposes they do not feature a turret. 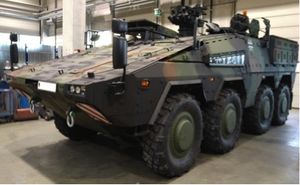 The first BOXER APC featuring A2 configuration was delivered on 30th November 2017 to the German Army. Changes compared to the A1 configuration resulted from experiences made during the successful deployment to Afghanistan.

With the 2nd batch of BOXER vehicles, the German Army ordered a total of 405 BOXER in different configurations. 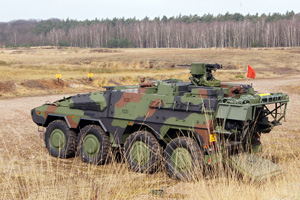 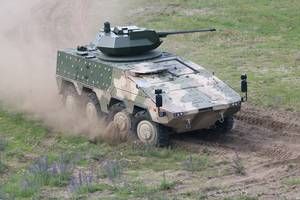 On August 22, 2016, OCCAR on behalf of the Republic of Lithuania and ARTEC signed a contract for the procurement of BOXER Infantry Fighting Vehicles. 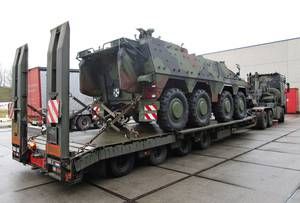 On 8 March 2016 the first BOXER Cargo Version has been delivered to the NL Army. The Cargo version is the fourth out of five BOXER versions for the NL Army. So far the Driver Training Vehicle, the Ambulance and the Command Post version have been delivered or are still in delivery. The Cargo version can carry up to 2,500 kg of load highly protected in a BOXER vehicle. The crew consists of the driver, the commander and the gunner. The NL-Army ordered a toal of 200 BOXER vehicles in a first batch. Deliveries will last until 2018.

2nd batch of 131 BOXER vehicles for the German Army 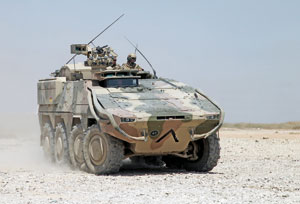 On December 18, 2015, the ARTEC has signed a contract for a second batch of 131 BOXER for the German Army with OCCAR. All 131 vehicles will be in a new configuration of the Armoured Personnel Carrier (Gepanzertes Transportfahrzeug). The vehicles and related logistic deliveries will be delivered from 2016 to 2020 to the German Army.
With the second batch, the number of contracted vehicles rises up to 603 vehicles for the Armies of Netherlands (200 vehicles) and Germany (now 403 vehicles). So far the Netherland’s Army has contracted five versions whereas the German Army has contracted four versions in different configurations. All vehicles are based on the identical BOXER Drive Module.

BOXER selected as IFV for Lithuania 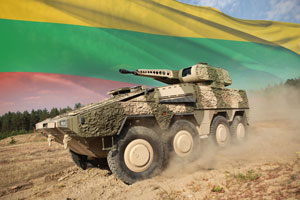 On December 11, 2015 ARTEC with the BOXER vehicle has been declared preferred bidder by the Lithuanian State Defence Council for the Lithuanian Infantry Fighting Vehicle Programme. BOXER has been selected as the preferred vehicle amongst 10 offers.

From 2017 to 2020 in total 88 vehicles with a medium calibre turret are requested by the Lithuanian Army. The Procurement is foreseen to be managed via OCCAR with Lithuania joining the only true European Vehicle Programme – the BOXER. 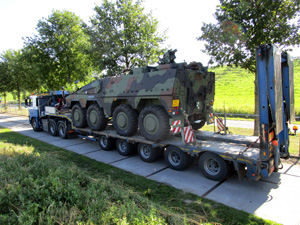 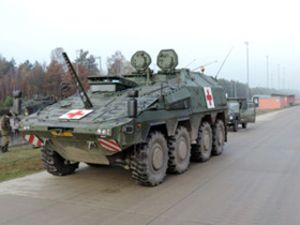 BOXER returned back from Afghanistan 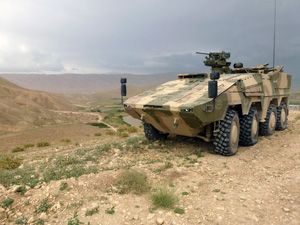 End 2014 the last BOXER returned from its deployment by the German Army in Afghanistan. During the operation in Afghanistan the vehicles performed up to the expectations of the German Army. In total 38 BOXER in the versions APC (GTFz), Command Post (FüFz) and Ambulance (sgSanKfz) have been deployed to Afghanistan to support the ISAF troops since 2011. 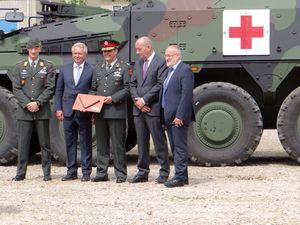 Delivery of first BOXER Ambulance vehicle to the Netherlands 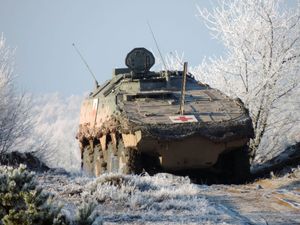 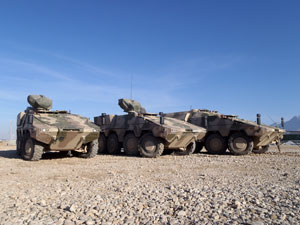 The BOXER is deployed to Afghanistan since summer 2011. Due to its reliability and perfect match to the environment and threats, the German Army also deployed the BOXER Command Post (FüFz) and the Ambulance (sgSanKfz) to Afghanistan – operating in concert with the Armoured Personnel Carrier (GTFz).

First BOXER vehicle for the Army of the Netherlands 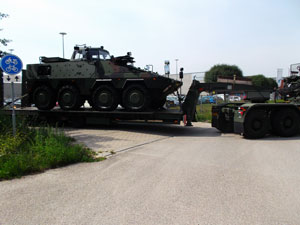 In August 2013, the first BOXER has been delivered to the Army of the Netherlands. The Driver Training BOXER is the first of a total of 8 Driver Training vehicles to be delivered until January 2014. These vehicles are used to train the drivers and commanders on a real BOXER, prior operating another BOXER version. From January 2014 onwards, the next version – the NL BOXER Ambulance – will be delivered, followed by the Command Post in 2015 and the Cargo and the Pioneer Vehicle in 2016. Until 2018, a total of 200 BOXER vehicles will be delivered to the Netherlands Army. 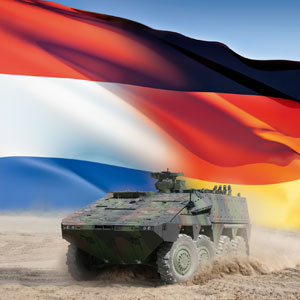 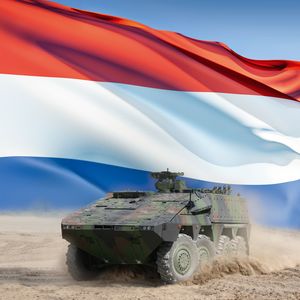 January 2013 – After a significant re-design and adaptations to latest requirements, as well as introducing a new BOXER variant, the first BOXER vehicles for the Netherlands Army will be delivered mid 2013. In total 200 vehicles in 5 variants will be delivered until 2017.

Per end 2012, in total 180 BOXER vehicles delivered to the German Army 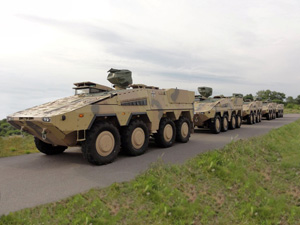 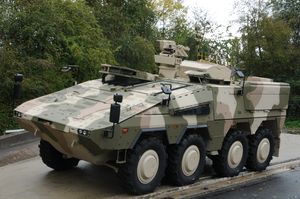 December 2012 – In December 2012, the last of 65 German Command Post BOXER (FüFz) has been delivered to the German Army.

The last FüFz was already in the configuration A1, which includes further improvements and adaptations to the deployment in Afghanistan, encompassing further protection, new communication equipment and several changes in the interior.

All FüFz A0 vehicles will be upgraded to the A1 version.

Deployment of 3 variants of BOXER into theatre 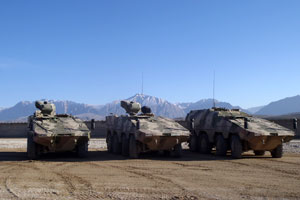 December 2012 – In December 2012, the first 6 German Ambulance BOXER (sgSanKfz) have been deployed to AFG. They are supporting the troops with new capabilities and possibilities.

As per January 2013, now 31 BOXER are being in operation in Northern Afghanistan – 17 Armoured Personnel Carriers (GTFz), 8 Command Posts (FüFz) and 6 Ambulances (sgSanKfz).

It is fair to mention the first positive feed back from the German user of the vehicle in Afghanistan – BOXER is now a battle proven vehicle. 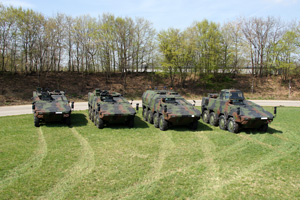 August 2011 – With delivery of the first BOXER Ambulance vehicle, all four German BOXER versions are now in series delivery. The four German BOXER versions comprise the BOXER APC an armoured troop-carrier with space for the crew of three (commander, driver and gunner) plus up to eight infantry soldiers.
The BOXER Command Post provides space for also a crew of three and two additional soldiers. It further provides a variety of radio transmitters for secured communication and data transmission and features /equipment for briefing and mission planning.
The German BOXER Ambulance is designed with a higher roof to allow the medic staff first aid, and even more intensive treatment, of casualties in upright position. It can carry up to 7 casualties in seated position or up to three casualties on stretchers in addition to the crew.
The fourth German BOXER variant is the Driver Training Vehicle, specifically designed to train the soldiers in handling of the BOXER prior a mission deployment. All 10 contracted DTVs have been delivered to the German Army meanwhile.

Deployment of first BOXERs into theatre

July 2011 – Five APC BOXER are on their way to Afghanistan to support the German troops under the ISAF mission with its excellent level of protection, mobility and survivability.
The new APC BOXER, specifically equipped for this mission, will be deployed by one of the German training and protection battalions in the area of Mazar-e Sharif. ‘This step represents a significant increase of protection and mobility for the German soldiers in theatre’ - said Chief of Army Staff Lieutenant General Werner Freers - ‘it is a good day for our soldiers deployed in peace-missions around the world.’

BOXER in operational use by German Army 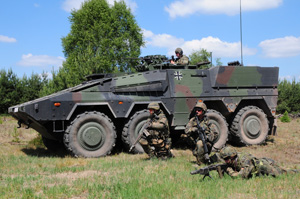 May 2011 – The first BOXER (in the version of GTFz/APC) was handed over from the German BWB (Federal Agency for Defence Technology and Procurement) to the Heeresamt (Federal German Army Agency). Subsequently the vehicle was handed over by the President of the BWB, Harald Stein, to the Chief of the Heeresamt, Major General Wolf-Joachim Clauss in a ceremony at the army training centre in Letzlingen.

‘After a successful, extensive, multinational development phase this state-of-the-art, armoured, wheeled vehicle is now finally handed over to the German Army, here at the excellent training ground Letzlingen’ - said Mr. Harald Stein in his ceremonial speech.

The hand over of the BOXER GTFz (APC) was executed by purpose on the army training ground in Letzlingen, as a few months ago the Mechanized Infantry Battalion 292 started its training for the Afghanistan mission there.